How Will the 2020 Election Affect the Stock Market?

2020 has been an turbulent year, to say the least, and it’s about to get a whole lot more dramatic with the presidential election less than a couple months away. Even with debates and campaign rallies being limited by COVID-19 concerns, this figures to be one of the most contentious elections ever with the country so far divided on many different political, social and economic topics.

Many investors tend to panic when a presidential election is looming, especially this year as the stock market has already been such a roller coaster ride. Investors worry about anything that potentially causes change in the status quo. What happens to the economy if Biden wins? How will it be affected if Trump stays in office? What about the Senate and House majorities? There are so many “what ifs,” but how much does the presidential election really impact the market?

History shows us us that, over the long term, market performance really isn’t affected by who wins presidential elections. There may be some temporary reactions—positively and negatively—but ultimately things get back to normal and the market reacts more to other factors in the economy. Corporate profits perhaps have the most impact on the economy as a whole. 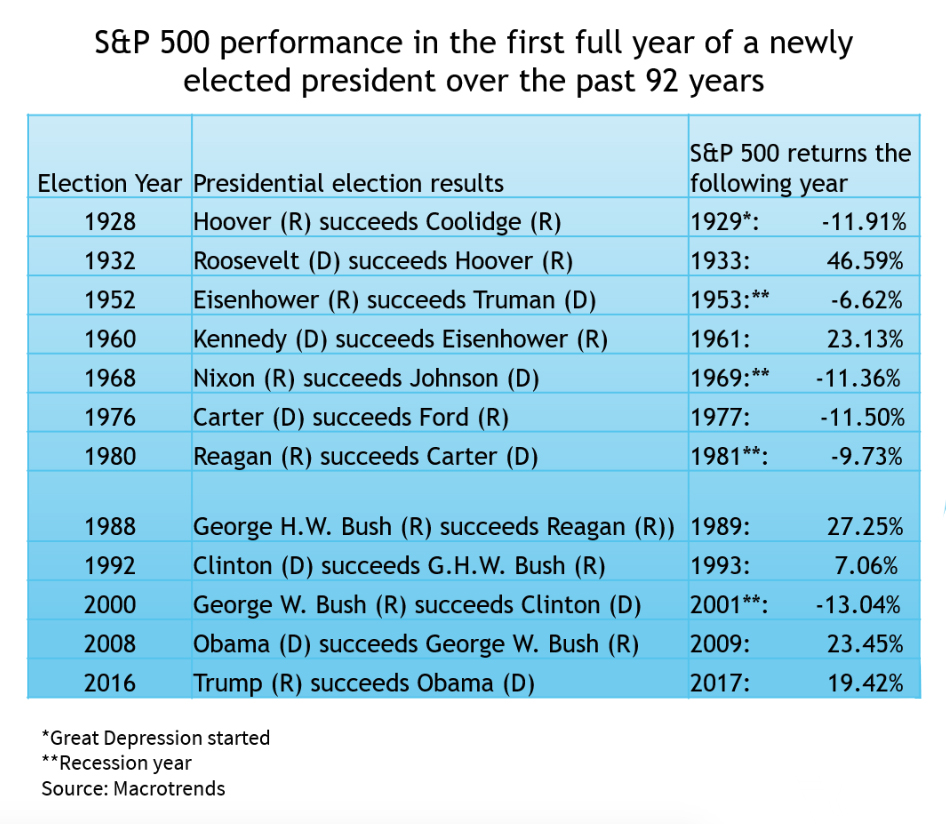 A Look at the Data

The table above shows every change in presidential party power dating all the way back to Herbert Hoover in 1928. The percentages are the gains or losses experienced by the S&P 500 Index in the first full hear after each new President took office. Some had market losses. Others had strong gains. However, if you look closely at the biggest losses, they were following recession years. In Hoover’s case, the market was flying high in 1929 until the October market crash sparked the Great Depression. 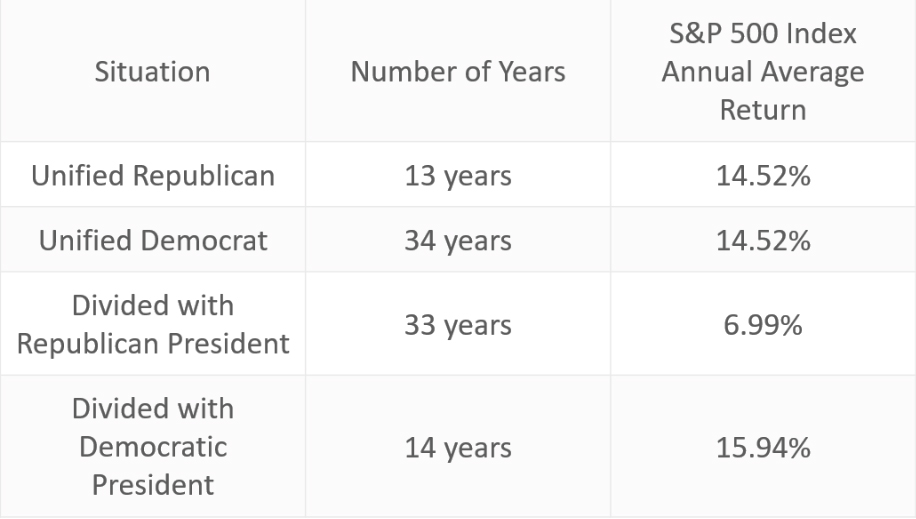 The overall numbers show the stock market fairs better under a unified government, but is still a net positive no matter what. Markets always self-correct over time and who is in power actually has very little bearing on the long-term growth of the stock market.

What about those who say that wealthy investors run for the hills when Democrats raise taxes? That’s not supported by the evidence either. For example, President George W. Bush raised taxes on the wealthiest Americans in 1990, sparking the usual fears of a massive market selloff. Instead, the S&P 500 delivered positive returns in eight of the following nine years.

Though it may seem like things are going to change dramatically after any Presidential election, the numbers don’t lie. Presidential politics and tax policies have very little impact on the markets, as the stock market still tends to post positive returns over the long term.

We’re not here to make a case for one candidate over the other. We’re here to guide investors to make smart decisions. You want to have a solid investment plan that survives any short-term bumps in the road while giving you steady gains over the long haul. Don’t panic because of the election. Don’t sell off all your stocks because your candidate didn’t win. Don’t overbuy because your candidate did win. Stay focused on your long-term investment strategies and keep planning for a brighter future ahead.

For help with your investment planning for the rest of 2020 and beyond, contact Illumination Wealth to get the advisement and insight you need to make good short-term and long-term investment decisions. We’ll be happy to set up a no-obligation introductory consultation with one of our top financial advisors, so you can see if our services are right for you.

Creative Planning – Elections and the Markets

McLean – Are Republicans or Democrats Better for the Stock Market?